My time with the festival kicked off on opening night at St Anne’s Cathedral – the namesake of the festival – with Camille O’Sullivan.  Having only heard of Camille’s performances I was intrigued with what was in store.  Camille took to the grandeur of St Anne’s to sing from her latest album Changeling.  I say sing… Camille is not a performer you can pigeon hole, her performance nods towards a cabaret or theatrical experience. 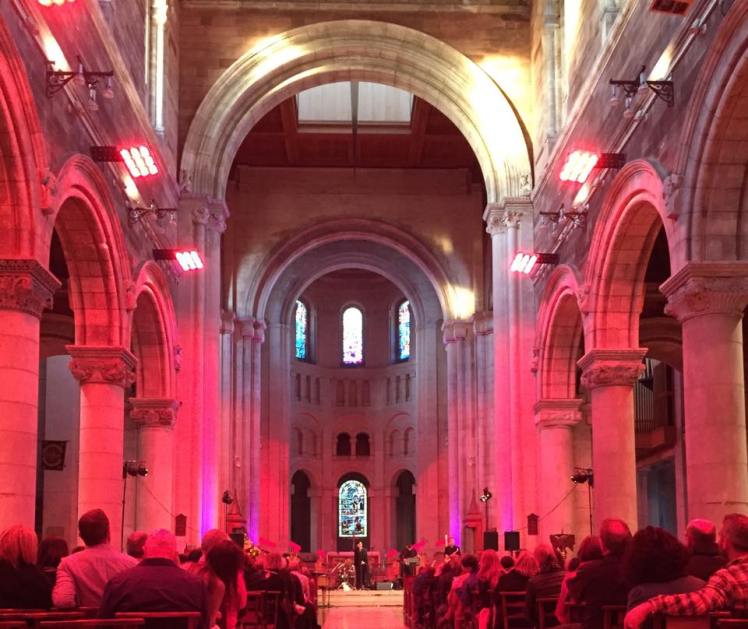 This may appear a little bonkers to some but you can’t help but be drawn into her world of illuminated bunnies, bird cage toys and outstanding vocals.  The latter beautifully displayed a cappella, making the most of the cathedral’s unique acoustics.  O’Sullivan’s work is entirely covers of artists such as Radiohead, David Bowie and even Snow Patrol but it was her “finale” of Nick Cave’s The Ship Song that blew me away.
She followed it up with two more after encouragement from the rapturous applause of the audience.  She was a delight to meet even if it was a quick hug and to provide an outlet for all her expletives she had been holding in all evening in the holy surroundings! Check out her music here.

My next shift took place at the Oh Yeah Centre where the lovely lads of the Stendhal Festival of Art, in conjunction with CQAF, hosted a showcase night.  It was to show off just 3 artists off the vast line-up for this year’s festival in August.  First up was Ryan McMullan who you hear a lot of on this website.  We can’t help it, his talent is staggering and he’s only just starting out, he is definitely one to watch.  As I was sitting on the door list in hand, I could hear him belting out the now familiar tunes of Listen, Holding Me Down and a classic Stevie Wonder number.  Ryan has the ability to carry his songs with a powerful vocal that still allows his unique tone shine through.  He’s sure to have a few smash hits in his future.

Following Ryan was Katharine Philippa, an intense performer who appears to take in every aspect of life and translate it into music and song.  Finding solace before her set, it would appear she puts every part of her emotion and being into her performance.  While I dislike drawing comparisons it’s hard not to liken to her to Florence Welsh while she sits on stage giving you a privileged glimpse into her world.

Join me in the Pines took the headline spot for the evening.  David Geraghty along with his banjo was joined by Tiger Cooke and Clare Finglass both providing harmonious accompanying vocals.  Singing of days gone by and of the change in his hometown of Leixlip, David’s music is gentile and melancholic with a little banjo liveliness mixed in.  The whole evening was a real treat for the ears. You can check out all 3 acts at The Stendhal Festival of Art in Limavady come August.

Lastly my bright orange tee took me to the University of Ulster for a special tour of the Orpheus Building before it disappears into a heap of rubble to make way for the university’s expansion.  This unique tour lead by Mike Catto took us through significant parts of the building before finishing in the Art Deco ballroom.  Along the way the small group were treated to the delights of music dance and literature celebrating the building and the stories of its past.

After gathering on the glass bridge to marvel at the building’s façade we were shown to what was once a drawing room, now artist studio space, where Gascia Ouzounian played out a piece from Bach.  Gascia’s recent works explores the soundscape of urban architecture, a thoroughly fascinating topic.  Next up we were shown the staircase that hundreds would have once climbed to the lure of ballroom being told of the ballroom etiquette. Tea and soft drinks would be served, there was to be no Jitterbugging and no woman-to-woman dancing. The Bellehoppers decided to break most of these rules to give us a demonstration of the Lindy Hop (which led to the Jitterbug).  A delight to watch although I had to contain myself from joining in!

We finished in what was once the Moderne Orpheus Building now home to student artist studios.  The spring floorboard is still intact as are some decorative features against the original curved ceiling.  With it’s hay day in the 40s and 50s the Orpheus provided a place for local people from both sides of the community to come together for a fun night out.  Here local writer, Jan Carson had put together a reflective look on the building and the stories buried in it’s walls.  She left us with these poignant words:

“Things are not lost which can be remembered, this is not Orpheus, this is Belfast”

An absolutely delightful event for the festival.