The north coast is a place where city dwellers descend upon come summer and mid-term breaks.

Come Halloween weekend I decided it was time to clear the cobwebs with some bracing sea air and a couple of dear friends.  Having had an unusually mild autumn we were blessed with kind temperatures and fairly dry weather.  Our base was Portballintrae, a small seaside village nestled between the Giants Causeway and Dunluce Castle.

Friday Evening
Travelling from Belfast we had arrived just in time for the Portballintrae Halloween celebrations with samba drummers, a family lantern parade and fireworks over the bay.

With rumbling stomachs we strolled to one of the newest additions to the Causeway Coast’s restaurant scene, Bartali.  With it’s cosy pub feel and friendly welcoming staff a relaxed dining experience and an Italian style menu awaits you.  Similar food to that of it’s sister restaurants in Belfast – Coppi and Il Pirata – the portions are perhaps a little more country sized, especially the desserts!  And with their £15 Best of Bartali menu the value is unreal.  I can highly recommend the truffled duck mac ‘n’ cheese and chocolate torte, not a morsel was left between any of us.

Saturday
We took the 5 mile journey to the neighbouring resort of Portrush to watch surfers brave the cold Atlantic waves whilst walking along the East Strand Beach.  Those with young children can enjoy the views from the play park situated beside the historic Arcadia, those without should pop into the former ballroom to admire the stunning vista over a cuppa and take in the exhibited art.  If the mood takes you could always try a spot of Yoga or Pilates, a full list of classes is available on their website.  Unfortunately the Arcadia isn’t open all year round but I took pleasure in admiring the 1920s facade from the nearby 55th North cafe/restaurant. 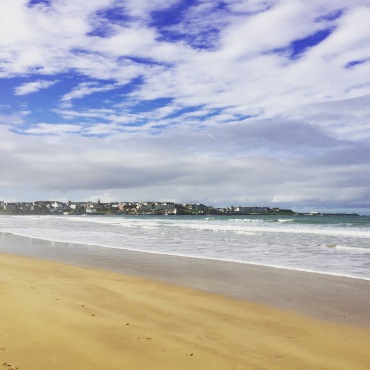 For the walkers amongst you a gentle stroll can be had along the headland towards the West Strand.  Babushka is situated in an idyllic spot for refreshments or a snack overlooking the beach on one side and Portrush Harbour on the other.

It’s difficult to surpass a trip to Barry’s Amusements while you’re here.  For many people Barry’s featured heavily in childhood summertime trips, whiling away hours on the penny slot machines, getting dizzy on the waltzer and sliding down the helter skelter are fond memories I hold dear.  Walking back past the harbour you’ll see a varied mix of restaurants with varying cuisine from Asian and Italian to hearty pub grub.  The Ramore Restaurants appear to be taking over the Portrush dining scene one restaurant at a time, and believe me having ate in a few of them it’s no bad thing.

Heading back towards our base we found it hard to resist the lure of the old style luxury at The Bushmills Inn.  The village of Bushmills, famous for it’s whiskey of course, is less than two miles away from Portballintrae… a very walkable distance meaning you can ditch the car and indulge in a tipple or several.  After a walk along the river the inn, with its many nooks and crannies and roaring open fires is a perfect spot for a light libation. 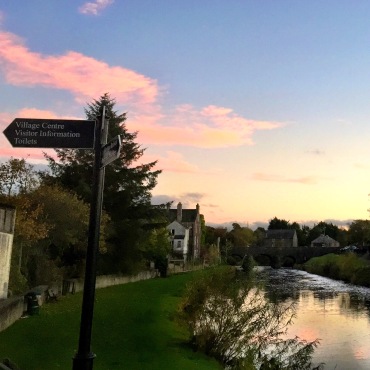 Sunday
If you need to clear your head the morning after the night before there’s no better place than the coast.  Don your walking boots for the five and a half mile hike to Giants Causeway and back.  From the car park in Portballintrae head left towards the beach and across the Quarter Mile Bridge to Run Kerry.  Through the sand dunes and onto the beach, the path will lead you to along cliff tops until you reach the Giant’s Causeway Visitor Centre and the Causeway Hotel.

Since you have the walking boots on you may as well continue to “follow in the footsteps of giants” down to the world-famous basalt columns.  The looped walkway around the world heritage site, taking in unique rock formations such as the Organ and the Giant’s Chair, is a further 2 miles so no doubt you’ll be ready for a cup of tea and some wholesome food.  A former schoolhouse The Nook is a small listed building with roaring fires and an outside terrace it makes for a great spot in any weather.

We, however, opted to hop on the Giant’s Causeway train which runs from Bushmills and back through Bushfoot Golf Course and along the beach.  We dined in the Causeway Hotel with some toe tapping traditional live music in the background.  Though we did think it best to walk off our lunch and so off we set for the bracing winds of the coastal path… which were non-existent as we had an exceptionally mild and sunny day!

Whilst Belfast was beckoning it would have been careless not to take the scenic route home.  The popular option back to the city is the coastal route along the Antrim coastline but we travelled cross-country for rolling fields and a pit stop at the legendary Dark Hedges.  The hedges have always attracted visitors but never more so since they were featured in the hit TV series, Game of Thrones.  With bus loads of tourists descending on the hedges on a daily basis we were lucky with the timing of our relatively quiet visit.  The trees were basking in the light of one of the most beautiful autumnal sunsets which made for a picture postcard moment, and a selfie of course!

Although small Portballintrae is a beautiful place to base yourself for a North Coast visit.  With a world heritage site, a whiskey distillery and castle ruins all within close proximity there’s a lot to keep you active.  The seaside village has a caravan park and one hotel, The Bayview Hotel, which has a magnificent seafront location and a welcoming atmosphere.  Other accommodation is available in the way of apartments, cottages and houses through private rentals.  Well worth a weekend getaway.