Yet another weekend of exploring Northern Ireland’s heritage for free! 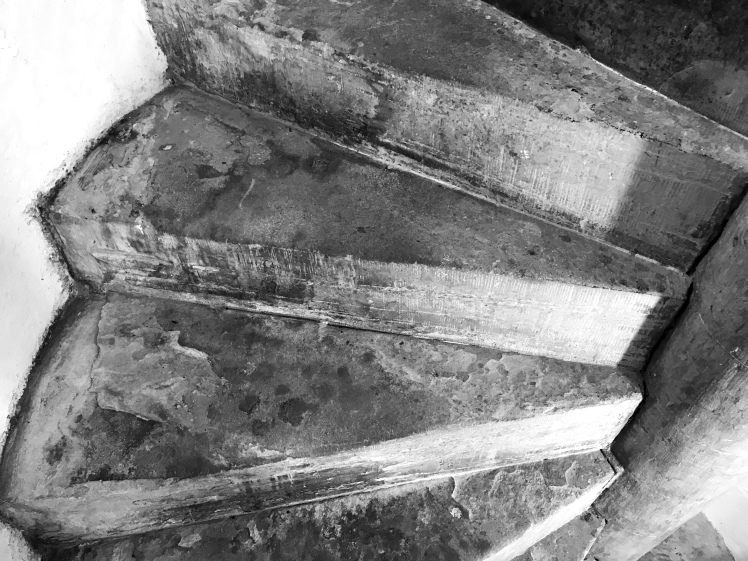 Every year the European Heritage Open Days opens up historical places and spaces allowing visitors a glimpse into buildings that are not usually open to the public.  2017 marks it’s twentieth year and over the years I’ve taken the opportunity to explore lots of interesting places in Belfast and further afield, you can read about previous years here:

This year I had another jam packed weekend of historical discoveries.  Beginning close to home I visited Helen’s Tower in the Clandeboye Estate, Bangor.  Nestled deep in the woods the tower proved a little difficult to get to, with a little misdirection we opted for parking at Clandeboye Golf Club and followed the path through the woodland, past an army fun run and to the magnificent structure emerging through the trees. 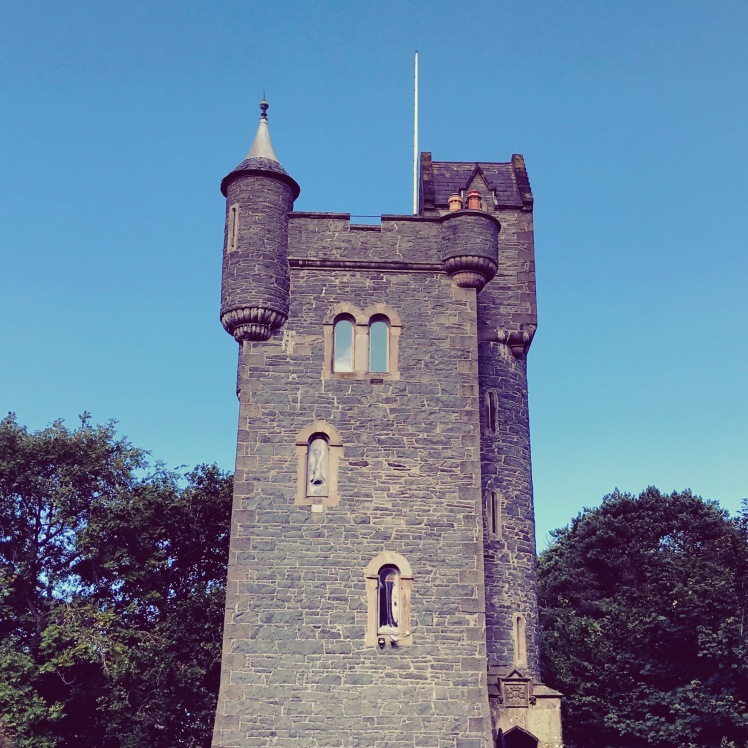 Helen’s Tower was designed in 1848 by William Burn and completed in Oct 1861,  it was part of the ambitious landscape project by Lord Dufferin covering the five miles between Clandeboye and coast at Helen’s Bay.  The tower was named in honour of his mother Helen, a granddaughter of Richard Brinsley Sheridan, the great Irish playwright, orator and politician.  It was built as an idyllic retreat with the surrounding woods designed to enhance the romantic feeling of the tower.

A winding staircase leads past a bedroom and kitchen to the most beautiful reading room with it’s exquisite ceiling and views over the Clandeboye Estate.  On the third floor is a panelled room with poems of the tower on metal plaques adorn the walls and further up the stone steps brings you to the rooftop where panoramic views of North Down can be enjoyed – particularly when the sun is shining.  To the north lie the towns of Holywood and Bangor and to the Southeast you’ll see Scrabo Tower.  The tower would have been used for entertaining with the little cubbyholes in each turret storing pheasant or other game caught on the surrounding land.  The tower, currently managed by the Irish Landmark Trust, is available for holiday rental throughout the year.

This year’s theme was Heritage and Nature: A Landscape of Possibilities, with many events demonstrating the links between our natural landscape and biodiversity to our built and cultural heritage.  So from clambering through nature to Helen’s Tower it was back to Belfast to Friar’s Bush Cemetery on Stranmillis Road.

Adrienne was our brilliant guide for the one hour tour starting with the Hawthorne tree which stands at the centre of one of Belfast’s oldest graveyards.  The Penal Laws in 1691, outlawing the Mass service and open worship, led to priests gathering their congregations in secluded areas of the countryside to perform religious duties covertly.  This cemetery was one such site.  The tale of the priest who came to say Mass is told in the poem, The Friar’s Bush by Belfast Poet Joseph Campbell in 1905.  It tells how his congregation buried him at the base of the hill and on his grave sprung up a Hawthorne Tree.  This tree is how the graveyard got it’s name. 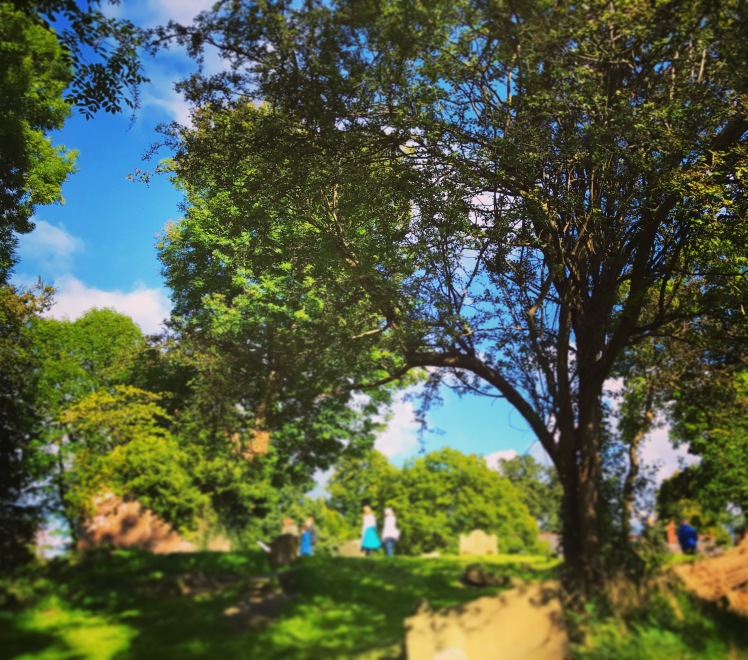 We heard the stories of Plaguey Hill, a raised area within the cemetery walls where those who died from Cholera, Typhus and Dysentery in the mid 1800s are interred.  This mass grave is the reason Stranmillis Road was not widened until it passed the cemetery as it was thought that opening the ground would release the disease back into the environment.  Of course Cholera is not an airborne disease but is spread through water and so the poor souls encouraged to wash frequently were adding to the epidemic rather than avoiding it.

Adrienne took us to the graves of Barney Hughes (1808-1878), renowned is his day for innovative production and marketing ideas in the bakery industry.  He was recognised as Belfast’s leading master baker and by 1870 owned the largest baking and milling enterprise in Ireland.  He was respected by both sides of the community as a politician, industrial reformer and philanthropist.

Our tour ended with one of the most ornate monuments in the cemetery, erected for poet Kevin Buggy who died at the young age of 27.  Editor of  The Vindicator, a newspaper with staunch view on Irish independence, his grave was built with monies raised by the Repealers of Belfast and marked their insignia and motto Fortis Pro Fide et Patria.  Strength for Faith and Country.  Tours of the graveyard are available by appointment and can be arranged through the Belfast City Council.

My third and final tour of the day was really a stand out event for me.  Departing from Belfast I took a bus tour with Lough Neagh Tours to get a little taster of the lough’s landscape, heritage and culture.  And it’s eels – literally.  I loved it so much I have written a separate post which you can read here. (opens in new window)

The second day of this year’s European Heritage Open Days took me to Derry-Londonderry for a city tour with architect Mary Kerrigan.  The walking tour incorporated the architecture and urban planning of the city. 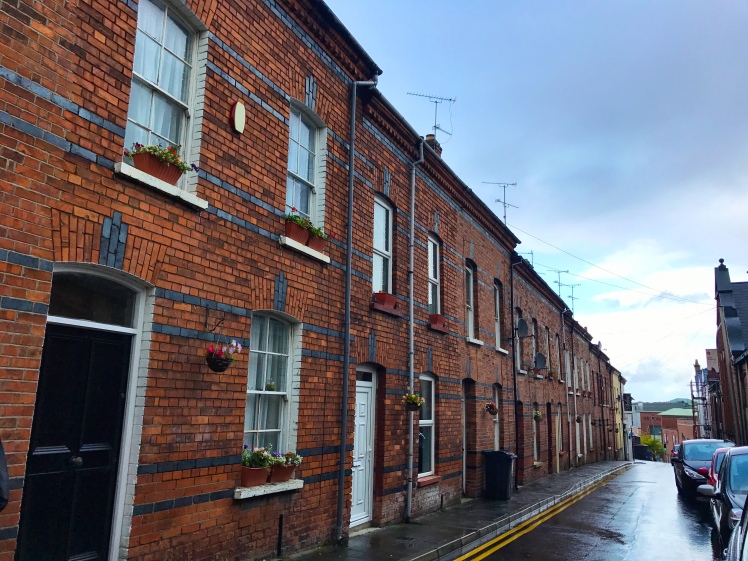 Taking in the City Walls, the Bogside and the Fountain areas Mary touched on the city’s planning at various points in time over the centuries.  We heard of how the streets that follow the city walls at Butcher’s Gate follow an old pilgrimage route to the city.  I was also surprised to learn how plantation towns can easily be identified by the presence of a “diamond”.   We took in the architecture of various buildings such as the now closed Austins Department Store.

In line with the Heritage Open Days theme – a landscape of possibilities – Mary also talked about the future planning of Derry’s streets, the restoration and development of housing and buildings within it’s walls.  It was a cold, wet and windy afternoon but still a very enjoyable and unique exploration of the Walled City.

All these tours were totally free – even the Lough Neagh bus tour! So mark it in your calendars for next September.  In the meantime some of the places in the EHOD programme are accessible to the public for a fee or for special events.

For my highlights of previous years click on the links below: