A city event – just not in the city of Belfast!

Armagh Planetarium, close to the city centre of Armagh, was opened in 1968 beside the Armagh Observatory and the late great Sir Patrick Moore was appointed Director to oversee it’s construction.  It provides an astronomical education for people of all ages.

The planetarium hosts various open nights throughout the year.  In January, to coincide with the BBC’s Stargazing Live programmes, I went along to one of their FREE open nights with my sister, my “it’s not a wendy house, it’s my tattoo parlour” 7 year old niece, my 12 year old “too cool for school” nephew and my “I actually like hanging out with my aunts” 11 year old nephew.  Having previously taken the kids to see the Christmas show, Mystery of a Christmas Star, in the planetarium’s digital theatre, I knew we would be in for a treat.

Once inside the theatre our night sky was laid out in front of us as we reclined back and gazed up at the domed ceiling, an enthusiast member of staff encouraged plenty of audience participation as he took us through the various constellations visible to us and which we would later be gazing at through high powered telescopes.  Exploding Universe was the theme of the show with a fantastic journey through the stars demonstrating how our planet and all it’s elements came about, an engaging show aimed at adults but one that kids aged seven and up can still enjoy with the immersive graphics.  The show ended with the special treat for kids big and small – the Armagh Planetarium’s SpaceCoaster!  With the unique hemispherical projection it is just like being on a roller coaster…not for those with vertigo mind!

Afterwards we walked through the exhibition area with beautiful imagery of galaxies and planets and some wonderful pieces of art from the Seacourt Print Workshop adorning the walls.  There’s lots of interactive displays for the little people including stationed ipads with games and footage from the International Space Station, and replicas of satellites and space probes. 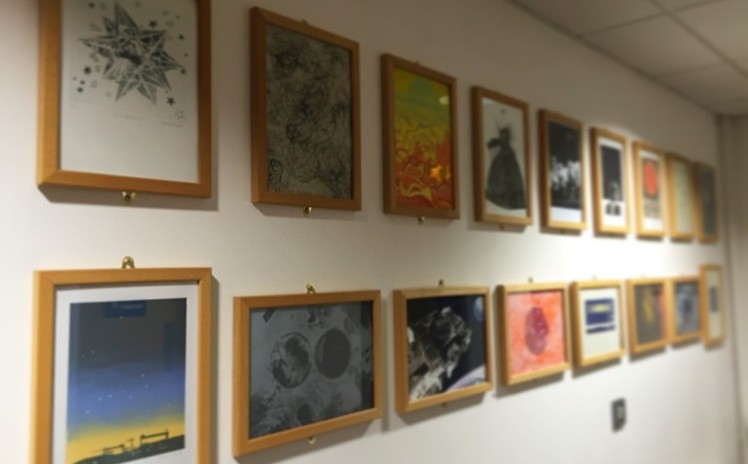 Of course we couldn’t leave without availing of the opportunity to get a closer look at the stars through telescopic lenses.  The very knowledgeable  staff were on hand to help locate the constellations previously discussed like the hunter Orion, the big dipper of the Ursa Minor constellation and the seven sisters of Pleiades and pointed out old and new stars.  A lovely evening enjoyed by all – even the moody teenager in the making!

With other activities such as rocket launching (so much fun!) during the school holidays and the Astropark set out as a scale model of our solar system, it is a great place to visit with the family.  Check out the website for all things astro including lots of interesting facts about the Planetarium, and what’s on.  Or if you want a taster like I had the next free open nights are on 23rd February and 15th March.